The Creepy House of Mr. Pasternak

On the edge of a small town, at the end of the very last street, there is a creepy house. No one knows anything about the resident. Mr. Pasternak is nothing more than a shadow 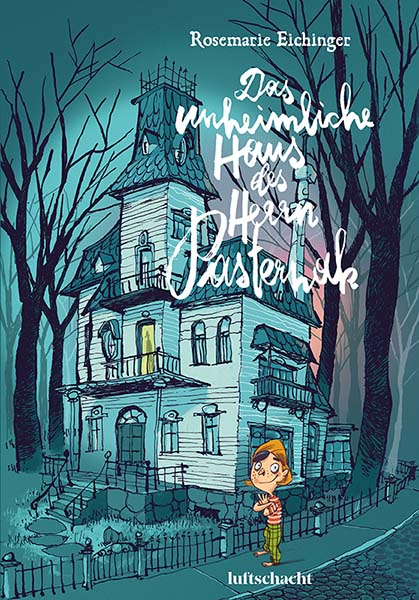 behind tattered curtains. A little girl named Anabel lives just across the street. Of course, she would never dream of knocking on Mr. Pasternak‘s door. But when her cat crawls through the window in the basement, followed by Anabel‘s little brother, she has to save the two, before they end up in the cooking pot— whether she likes it or not, she goes after them, armed with a salami she wants to offer in exchange …

Rosemarie Eichinger tells the story of Anabel, Mr. Pasternak and the creepy house, behind the facade of which hides a world that neither Anabel nor the readers could have imagined, with great verve. And cheese rolls in jars and a biscuit bush are not even among the most unusual things. Luckily, Thomas Kriebaum captured some of these oddities in his illustrations. Especially for those who might not otherwise believe it …

by Rosemarie Eichinger, with illustrations by Thomas Kriebaum

“… a children‘s book about the adventures of not tidying up. […] Rosemarie Eichinger peppers her story with funny little life lessons, such as the one about how children and tidiness just don‘t go together or how little brothers can be a real nuisance. [… ] The illustrations […] fit perfectly. [Krienbaum‘s] hidden object pictures from Pasternak‘s house of horrors can and should be looked at for a long time to catch all the crazy details..“ – Silvia Ottow, neues-deutschland.de

“What a story in which one is surprised again and again and learns about the peculiarities that fire the imagination. An exciting children‘s novel for pleasurable reading hours!“ – Deutsche Akademie für Kinder– und Jugendliteratur, 3/2020