Three meters, seventy-five centimetres water level – that is reality: The inner concept of the heroes Miller and Pynchon is that of an ordered world, their task: its possible mapping into the measured number. 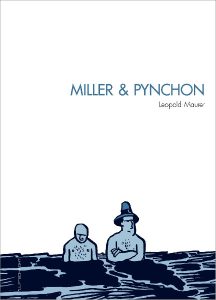 For both the melancholic Pynchon and the ballsy Miller, these abstract numbers represent the cohesion of their personal existence and provide them with a form of anchorage in reality: For Pynchon, who cannot get over the death of his beloved wife, for Miller who unremittingly continues to lose himself in sexual debauchery and its emotional meaninglessness. Together they set themselves the task of drawing a line of demarcation, which they suspend for a greater task: the measurement of the Venus transit, through which the distance between the earth and the sun is to be calculated. However, with the magnitude of the task, their personal despair seems to increase, and the more precisely the distances are calculated, the closer and the more insurmountably they define their own limits.

“Maurer’s Miller & Pynchon impresses the reader with the combination of a simple drawing style and a fierce language. The touching comedy of the book develops through the interaction between the pair.” – Berliner Literaturkritik