The bulimia had begun when she was fifteen and not feeling very comfortable with her body, which goes back to her early childhood in the countryside. The fact that ‘being good’ is connected to food as far as her family is concerned, is a principle that she had caught on to early on. The rest follows almost automatically: the 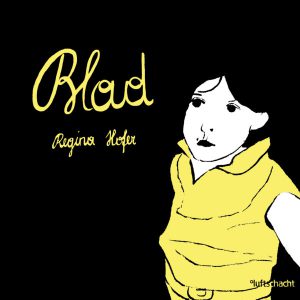 early onset of puberty, frightening bursts of growth, anorexia, hair loss, binge eating, repeat examinations in maths. At eighteen she starts to study Art, hoping for a new beginning. But the old pattern repeats itself …

In her partly autobiographical graphic novel Regina Hofer tells of the struggle of a young, creative woman with her self image and outside image, with the worldview of her traditionalist father and her longing for the boundless world out there. She conjures up the unspoken feelings of childhood and youth through wellstructured lack-and-white images and reconstructs the origins of an eating disorder through the associative flow of the narrative.

“The black-and-white pictures make her agonies visible: One sees bodies with enormous eyes, gaunt and bony, or a face that splitters across multiple panels. The narrative style is equally harsh—not that it exaggerates, rather the opposite: the text maintains its distance, remains sober, terse, and absolutely unsentimental. Chubby is a disturbing, honest book.” – White Ravens 2018

“Regina Hofer is […] a gifted narrator. You just have to keep reading.” – Ulli Lust

“It is a downright model case of a narrative debut: You’d think that this voice has been a familiar one for quite some time, as unagitated as it sounds.” – Andreas Platthaus, FAZ-Blog