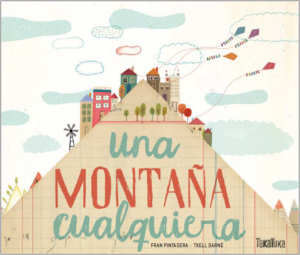 The two villages are preparing for the celebration of their respective festivities, but an incident during the celebrations brings on an absurd confrontation of bellic proportions.

The contrast between the good intention of the two neighbouring villages who are celebrating the town festivities and the confrontation that arises from the firecracker smoke which casts a shadow on the party up on the mountain serves as the setting to take on a universal issue. Lack of empathy and dialogue is the cause of numerous conflicts as absurd as they are avoidable. Txell Darnè’s naïve style of illustration over a collage background deepens the contracts between the idyllic life in these two villages and the destruction that results from the conflict.

“The collages are predominantly made of a colourful mix of materials, they are lively and tell stories, and complement the short texts. The illustrations are composed of drawings and photos—there is much to discover for children from the age of four.” – Libelle