Joki and the Wolves

A suspenseful children’s book prompting a fascination with wolves 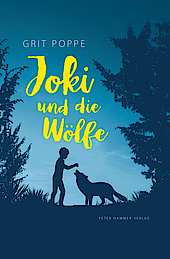 A wolf is trotting through the Mark of Brandenburg. He caught prey for his family, as the little ones are already in need of meat and show the urge to leave the cave. Only Blackear, the smallest whelp, appears still weak and mother wolf senses that he needs her more than his stronger siblings do. One day, during an „outing“, Blackear gets lost. All of a sudden, the wolf child finds himself alone in a world he doesn’t know.

Actually, Joki was supposed to unpack moving boxes but he prefers to rove around the woods. And even though it is his first excursion, he makes a discovery: A wolf lives in the forest! At first, the boy watches only him but soon, he starts to watch the entire pack. The wolves sense Joki’s presence but they can also sense that he doesn’t represent any danger.
But when Joki finds the whelp that got lost, he takes him with him and in doing so he lures the pack dangerously close to humans. Joki realizes what harm he has done and wants to make up for his mistake. Together with the wolf whelp, he sets out to search for the pack…