Long overdue: The sequel to One Two Three Me

New unexpected rhymes for the youngest 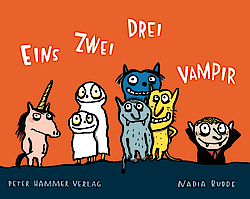 In 1999, Nadia Budde’s first picture book was published: One Two Three Me – it was hailed as a stroke of genius, won the most prestigious awards, and has long since become a classic. The author and the publisher agreed: It was high time for a sequel, and preferably one with a bite!

One Two Three Vampire is a parade of dangerous creatures, always three of a kind, and then there is the surprise fourth one that is responsible for the rhyme – and the start of the next group of three. Just so that nobody has to worry that children might get traumatized: the skeletons, tarantulas, sharks, and hornets in this board picture book are about as scary as the three-year-old ghosts that knock timidly at our front doors on Halloween.