The Stone and the Sea

What is time? Each day, Sören, the little green stone, gazes longingly out at the ocean. 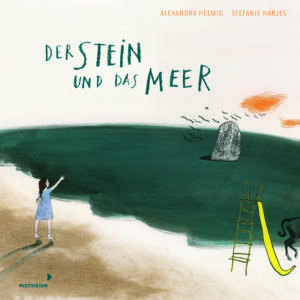 He yearns to feel the sea and fathom its secrets. But it takes the sea forever to reach him. He waits for days, for years, for centuries. Until one day a little girl finds  Sören – her lucky stone.

Multifaceted collages by Stefanie Harjes and essential poetry by Alexandra Helmig take us along to the sea  and show us a new grasp on the concept of time.

“Alexandra Helmig tells of a small green stone on a rock in the sea, not far from the shore. It has been lying there for thousands of years, observing what is happening around it. But as time goes by, the curiosity grows to leave the place and dive into the sea itself. The next big storm washes it away. And whoever looks at this picture book may accompany [the stone] to the astonishing end of the poetic story, in which a child ultimately brings about the decisive turn. Between the lines, significant, almost philosophical questions are raised and thoughts are stimulated that point far beyond the plot of this little story.

Stefanie Harjes’ pictures inspire this journey of thought by emphasising the unreal, the detached from reality through her surreal elements in the drawings, collages and silhouettes and by co-telling a truth of their own. This story seems to be out of this world. But in the grotesque little figures it plays with the known and the familiar. That is what makes this picture book so appealing and will keep the desire to fantasise and philosophise alive.”

“… a treasure that can accompany you all your life.” – Gießener Allgemeine 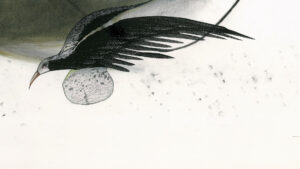