When Alice Littlebird, a girl from the people of the Cree, is separated from her family and taken to the Black Lake Residential School, she loses everything. The nuns take away her clothes and shave off her hair. She is not allowed to speak her language and is forced to pray to a God she doesn‘t know in words she doesn‘t understand. They even take her name: Alice Littlebird is No. 47 and only one of the children who cry themselves into sleep at night. Very quietly, because crying is forbidden. 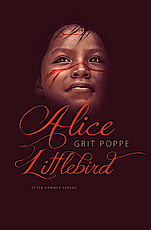 Alice is not even allowed to see her brother Terry, who lives in the school‘s boys‘ quarters. But she doesn‘t want to put up with that! When she finds two confidants in the rebellious Shirley and the cook Elli, she manages to meet Terry and he has long since come up with a plan: He and Alice will run away!

Grit Poppe tells this breathtakingly suspenseful story of a risky escape. Alice and Terry are fictitious characters, but the residential schools for the re-education of native Canadian children have been a sad reality for too long.

“Alice Littlebird is at least two things: a novel that tries to capture something historical, but also an adventure novel, and that makes it worth reading for children and teenagers. Grit Poppe has succeeded in an empathetic book with which you can see the bigger picture. But Alice Littlebird is something more: namely, ultimately a political book that reminds you that children and young people were wronged in the past, but that it still happens today.“—Jugendbuchtipps.de, Ulf Cronenberg

By the same author: