Melin had actually been looking forward to school. And it wasn’t noticeable at the beginning, because everyone makes mistakes then. It was only noticed a little later, when the kids were all a bit older. No matter how hard Melin tried: whether a word is written with i or ie, with h or without h, whether the word has one s or a double –s, it all looked exactly the same to her. 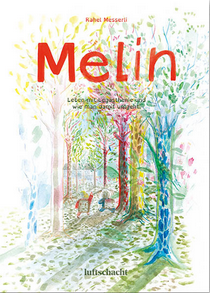 She therefore thought she was stupid, because everyone else was able to read and write properly, everyone except her …

Very carefully and with a lot of empathy does Rahel Messerli approach the subject of dyslexia in her picture book debut Melin and points out the problems associated with the condition: from initial incomprehension to feelings of inferiority, bullying, to attentive supervision. All this is done with cheerfully and airily dabbed illustrations and clear, simple sentences, where a letter may be in the wrong position or missing altogether.

“It is a book that deals with reading and writing disabilty and is aimed at those affected. A book in this form with such powerful images is an exception. […] It was important to Rahel Messerli to tell a positive story that reassures and creates understanding. She has achieved that wonderfully with Melin!” – Zita Bereuter, ORF Radio FM4 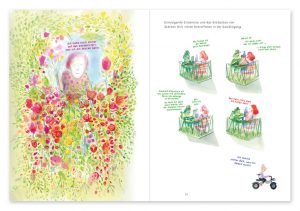