Drawing always came natural to her, even as a child. Getting through school was harder – she spent many years struggling through. Finally, Ingrid ended up studying retail design at the Academy for Fine Arts in Lier. By then she was still drawing, and her pictures turned out remarkably well. One of her teachers saw her talent. Himself an illustrator, he offered to coach her for a year. For Ingrid, this meant drawing as much as she liked and even making her profession out of it. She will always be grateful to Rik Van den Brande for giving her this chance. After working with Rik for a year, she drops out of school, determine to learn from practice instead of theory.

She starts working as a freelance illustrator for educational publishing houses in Belgium,  the Netherlands and France. There are assignments for toddler magazines by Averbode and Bayard. She was among the first contributors to Dopido, launched in 1995 and first home to her brainchildren Nellie and Cezar.

Working on all these projects, Ingrid can make a living as an illustrator. But after twenty years of drawing for others, she decides it is time for her very own book. ‘Wachten op Matroos’ was published in 2000 by editing house Querido. Ingrid created the illustrations as well as the storyline, and, André Sollie wrote the poetical words to express her thoughts. The result was awarded with a Gouden Griffel, Boekenpauw en Boekenwelp – important distinctions in the Netherlands and Belgium. Translations in French, German, English and Korean followed and ‘Wachten op Matroos’ became a classic.

After the success of ‘Wachten op Matroos’, Ingrid focuses on illustration books. Her new work attracts international attention. She starts drawing for the British publishing house Macmillan, and many of her books are published abroad before they’re even translated in Dutch. Ingrid’s work can now be read in over forty languages!

Meanwhile Nellie and Cezar have won the hearts of toddlers and teachers alike. This inspires Averbode publishers to feature them in a series of cardboard books, dolls, handicraft manuals, didactic materials, and even an animation series.

In the midst of all this commercial success, Ingrid keeps developing as an artist. She experiments with new techniques like gouache, pencil, pastel, collage, oil paint, etc. Always again, creating images is a discovery and a challenge. Ingrid searches for means to purify her pictures, simplifying them to the essentials. Her work stands out for its poetic, sensitive depictions of people and places.

In 2011 Lannoo brought ‘IK WOU’ to bookstores. For the first time Ingrid addresses an adult audience. Inspired by old photographs, she draws a series of portraits in her very own style. Writer Toon Tellegen finds the words to match the pictures. The result is a heart-warming encounter between words and images. Accompanying the launch of ‘IK WOU’, museum M in Louvain organizes an exhibition of Ingrid’s drawings. It’s the beginning of a success story: the exhibition travels through Europe and the book is reprinted three times, translated in French and German and nominated for Deutsche Jugendliteraturpreis.

Ingrid is still drawing for the child in her, and she is glad that her images move the hearts of young and older children. 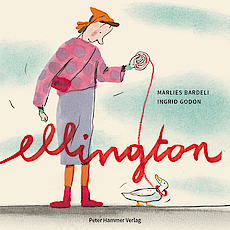