King Will Join Us Later by Andrea Karimé and Jens Rassmus has been shortlisted for the German-French-Children’s Literature Award 2018. This is the only prize for contemporary Children’s/YA literature in Germany and France. It is awarded to outstanding works of German and French literature every year with one German and one French author receiving the award. Both award-winners receive 6,000 Euros each. More information under http://www.df-jugendliteraturpreis.eu/ & http://www.df-jugendliteraturpreis.eu/shortlist/2018/433-andrea-karime

The jury about the book:

A pet as the symbol for home

In few words does Andrea Karimé achieve the maximum effect with a story in which the reader quickly puts himself in the position of a young refugee. The little boy impatiently narrates that he had to leave his pet dog King behind – and that the dog will surely join the family soon. Karimé’s text moves (also in colour) between two levels: In black letters the first-person-narrator reports on his first impressions of Germany and compares these with his home, which is a 100-day’s-journey away. In grey letters he longingly speaks to King and gives him advice – the dog is to wait until no more missiles are dropped, he is to run in the dark and hold on tightly on the boat when crossing the sea. These short sequences that describe the boy’s own escape route allow the reader to feel the great longing for the old homeland. As an equivalent to these text levels, Jens Rassmus’ images depict the local reality and the obstacles that the boy’s family have already conquered and that the dog is still facing.

The gap between the images and text can be mentally closed by the reader in various ways, depending on how he/she deciphers the pictures. 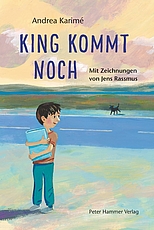