The Twelve Labours of Hercules

Hercules, most famous hero of Greece and son of the mighty Zeus, is a growing threat to King Eurystheus. Therefore the King comes up with dangerous tasks, that are meant to defeat Hercules.

The Oracle’s prophecy says that Hercules can only attain immortality after mastering all twelve labours. 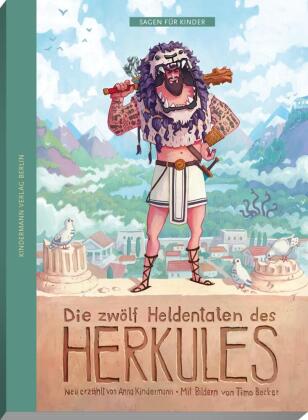 This is why the demigod fearlessly faces his fate and embarks on a journey that will make him fght against horrifc monsters, oppose wild animals and fnally even descendinto the underworld to obtain his long-desired immortality and a place amongst the gods on Olympus.

Anna Kindermann narrates the famous myth in an absorbing way that is appropriate for children and leads us into the world of Greek mythology. Timo Becker complements the text with fantastic illustrations and breathes new life into the old story.

“With Hercules, perhaps the most famous hero of ancient Greece, Anna Kindermann tells the story for younger readers and invites them not only to get to know the hero, but also to follow his tasks. In doing so, she tells the story in an exciting and lively manner, reduced in some places, and in this way she brilliantly succeeds in making the world of the sagas accessible to younger children. It is the start of a new series in Kindermann Verlag.” The Juy of the Deutsche Akademie für Kinder- und Jugendliteratur